What are the characteristics of rats?

Norway rats, Roof rats, and Cotton rats are among the many species of rats found around the world, and they are the rats that cause the most pest problems in homes and businesses. The Rice rat has also been identified as a hantavirus host by the Centers for Disease Control and Prevention, making it a public health concern.

Brown or sewage rats are common names for Norway Rats. They are enormous, bulky-looking rats that can reach lengths of 13-16 inches when measured from the tip of their tail to the top of their nose. The bottom of their body is grey, and the top of their body is reddish or greyish-brown to black. The Norway rat's ears and tail are hairless, and the tail is shorter than the rat's body length. Norway rats have blunt snouts and weigh between 7 and 18 ounces.

Roof rats are smaller than Norway rats and are known as black rats. Adults weigh anywhere from 5 to 10 ounces. Their tails are uniformly dark and longer than the rest of their bodies. The roof rat's body is greyish to white on the underside. The roof rat's muzzle is pointed, and the roof rat's overall appearance is much more streamlined and sleek than that of a Norway rat. 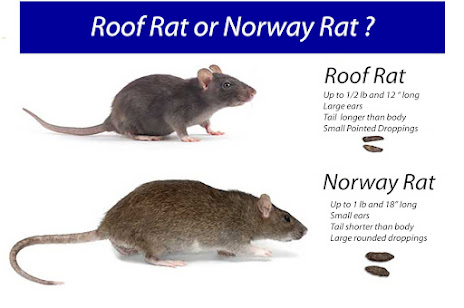 Roof rats are excellent climbers, so it's no surprise that they prefer to make their nests above ground. They do, however, occasionally establish nests in burrows. Most of the time, these rats are active at night. Scientists have discovered that the roof rat's long tail is evolved to help them climb and balance. Roof rats and Norway rats both have a keen sense of smell and are suspicious of new objects put into their territory. Roof rats aren't great swimmers and aren't often discovered in sewers.

Norway rats are most active at dusk or night, and they are dormant during the day. When a Norway rat population becomes so large that it faces increased competition for food, water, and shelter from other rats, certain members of the rat community may seek new sites to colonize during the day. Norway rats mate, rear their young, store food, and seek protection from predators in underground tunnels where they make their nests. Norway rats are good swimmers and can climb, but not as effectively as roof rats.

Roof rats are omnivores, meaning they eat a wide variety of plants, including fruits, cereals, seeds, and shopping items. Roof rats are also known to eat insects. Roof rats, like Norway rats, destroy significantly more food by contaminating it with excrement and urine than by eating it.

Norway rats are also omnivores, meaning they will consume almost anything that is found near garbage cans. Norway rats have also been known to prey on fish, poultry, mice, birds, small reptiles, and amphibians. They will eat grass, although they prefer meat or meat-related wastes. More information about what rats eat may be found here.

Roof rats prefer to nest above ground in bushes, trees, and dense vegetation, as previously stated. Roof rats are commonly found in high or secure enclosures such as walls, cupboards, attics, and false ceilings when they infiltrate dwellings. Coastal and near-coastal environments, as well as port cities, are likely to have roof rats.

Norway rats prefer to live in almost any area where people live. Garbage dumps, sewers, and pastures are among their preferred habitats. Norway rats can be spotted running around after dark in garbage cans and other places where human waste is found in most of our urban areas, hunting for food. The soil along building foundations, under woodpiles, and other garbage piles are all good places for them to burrow. Norway rats will most likely live in the basement or ground floor of a structure if they infest it. Learn more about the habitats of rats.

Roof rats are polygamous, forming colonies made up of numerous males and females. In regions where the environmental conditions are suitable, mating can take place at any time of year. Adult females can reproduce at the age of 3-5 months and can have up to five litters per year, each with about 5-8 young. Adult roof rats have a one-year lifespan.

Norway rats are polygamous and live in colonies with a large number of males and females. Mating is most common during the warmer months of the year, however, it can happen all year in some regions. Female adults have approximately seven litters per year and mate about 18 hours after giving birth to her litter of approximately eight pups. One female Norway rat can produce 50-60 young every year.

What is the best way to get rid of rats?

Because the habits, habitats, and behaviour of Norway rats and roof rats are so dissimilar, the first step in a rat control program is to correctly identify the rat and develop a treatment plan that is effective for that species. Consumer education is also a vital treatment component, as it ensures that the customer understands the principles of the suggested control program.

Apex Pest Control's pest management specialists (PMPs) are trained in all aspects of rodent Integrated Pest Management (IPM). Non-chemical and chemical methods are used to treat rats. The following are some of the more important non-chemical methods: 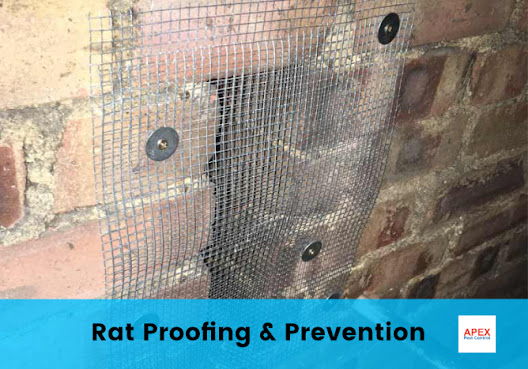 Baits meant to kill rats are used to control rats using chemical goods. Care must be taken to ensure that baits are correctly placed and that the product's labelled directions are strictly followed. The bait formulation is placed in a tamper-proof rodent bait station, which shields the bait from accidental exposure to non-target animals or people. Fumigation of transport trucks or rat earth burrows may be required in cases where rats are not controlled using conventional treatments.